For years, Wendy Williams has been a name in my household. I remember being a kid and hearing her on the radio when my mom would pick me up from school, or if we tagged along in my dad’s truck in the late afternoon.

The adults in my life referred to her like an old family friend. This was how I knew her. She was the lady on the radio with the big mouth, and while I never understood the magnitude of all she said on her radio show, it was clear to me that she was unapologetic in her approach. It was no concern of hers whether you agreed with her or not.

To younger me, who took too long to find her own voice in a bullied world, it was brazen. This woman – this black woman – was on the radio, she was writing books…this was my exposure to what journalism was. Before I ever knew the world of broadcasting or communications, I knew Wendy Williams, and I knew she was doing it right.

Just like a real friend, I don’t always agree with all Williams has to say. We’re not from the same generation, so we don’t see eye to eye on everything, but who agrees with everyone all of the time? What’s important is that she’s honest, and I always look for that in a friend.

Recently, Williams came under fire for crying on air over the lack of relationship between herself and 13-year-old son, Kevin. She was criticized for being too emotional and for overreacting (a woman with emotions, such an original insult), and her point was completely missed. Regardless of the forum she chose to express herself on, her message is something worth thinking about. 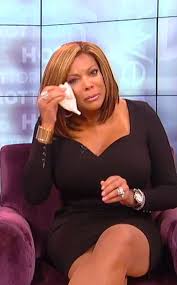 She’s a mother weeping for losing her only baby to adolescence, and to her credit, she has every right to be concerned. Her son is growing up in a world full of rape culture, with an all too strong, and somewhat convuluted definition of what it means to be a man, and even further, what it means to be a black man. Our black men today are never given the chance to be successful because of the stereotypes placed in this world to keep them down. We should be listening to her cries, instead of dismissing her worries. All too often we invalidate the opinions of celebrities because of their fame, but William’s fears are important and shouldn’t be cast aside.

All confident, WOC in the media need to be cherished like the gems they are. It is too difficult for us to be noticed by the masses and Ms. Williams has done it with grace. I applaud her for exposing her vulnerability and for consistently giving the public and unadulterated form of “Wendy,” when she doesn’t owe it to us at all.