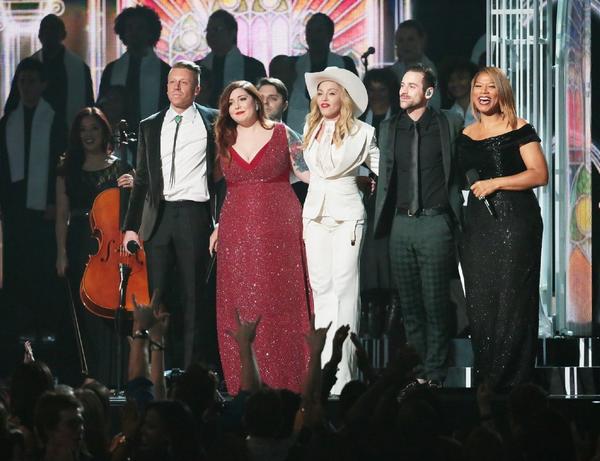 It’s been hallowed as the “gay anthem” of 2013, and Sunday night, Macklemore’s “Same Love” was performed in the key of “equality” at the 2014 Grammys. As queer and straight couples married down an aisle of the Staples Center, ordained by Queen Latifah and sung to by Mary Lambert and Madonna, I couldn’t help but shudder at the overwhelming display of groupthink sealed up in the arena. Granted, my heart fluttered for the married couples, who looked incredibly happy, but the whole performance in and of itself succeeded in being one of the largest displays of white privilege since the last House of Representatives meeting.

The song, “Same Love” was written to support legalizing same-sex marriage, in 2012, in the state of Washington. The song accomplished exactly what it was supposed to. It opened up an important dialogue and helped support a much-needed step for human rights. It was only its fame, in 2013, and how the song’s fame is framed that I am extremely critical of. Essentially, Macklemore wrote a song about a struggle he never had or will ever have, and became the poster boy for that struggle. (Let us not forget that he ripped off his “Thrift Shop” beat from a queer POC artist, Le1f, and got to bring home awards praising him for it.) The media will forever slow-clap for Macklemore thinking he was gay and writing a song about his journey to heterosexuality, but will continue to dismiss the queer and black artists that fueled him.

The only way for the media-at-large to represent LGBTQI rights, is to package it in a trendy white boy. This will not change the fact that under the wrapping, the illusion of “equality” is still surrounded by hetero-normative, white washed structures. It is all too important to bring attention to those who are marginalized, but to have the voice come from a straight, white, cis-male, is exclusive. It easy to celebrate diversity when a white person enters black dominated spaces, because this is a white rapper cleaning up all of the bad in hip-hop and rap, left by those “thuggish” black men.

I want to give Macklemore the benefit of the doubt, and say that he is aware of his undeniable privilege and how it affects his fame, but his screen shot of the unanswered text he sent to Kendrick Lamar only further exploited his “robbery” of Best Rap Song/Album. As if he isn’t asking for enough cookies for being the first ever white man to say something positive about those marginalized, this screen shot apology is just a pathetic attempt at a publicity stunt. He might as well have said “I’m sorry that you felt that way,” if disingenuous and insincere is really what he was going for.  #ItsWeirdAndSucksThatIRobbedYou is Twitter’s backlash on the text, and everyone else is quick to notice, imitate, and mock Macklemore’s poor attempt at ignoring his privilege.

Macklemore and Ryan Lewis seem to have a grand case of selective knowledge about social justice issues and privilege. You think it’s possible that everyone was wearing headphones and not paying attention when some intern agreed to let Madonna on stage with them for their Grammy “Same Love” Equality Parade? Madonna might be regarded as the Queen of Pop, but that’s only because her image of yesteryear completely overshadows her current problematic and offensive behavior. Just last week, Madonna posted a photo of herself and her 13-year-old son, in which she hashtagged the n-word, as she described as “a term of endearment.” (Wait, but.. she has a black son so it’s okay for her to reclaim a word that could never oppress her, right?)  Including her in their Grammy performance was counterintuitive to the ever apparent theme of “equality.” Incorporating Madonna into any definition of equality is setting the bar at white and wealthy, which is hardly equal at all.

The only redeemable characters in the “Same Love” performance were Mary Lambert and Queen Latifah. While it might be less obvious than Miley Cyrus’ cultural appropriation, these two women were used as props. Mary Lambert is a gay female, who wrote the chorus for her own song about queer love. She could have easily been more a more vocal, spotlighted person for this campaign, but she is often posted as an aside and made to perform with other, more “relevant” artists, such as Madonna. There is so much more to LGBTQI rights than gay marriage. It’s possible that if the media paid attention to anyone but rich, hetero-normative, white people, the general public might be more aware of that.

When Queen Latifah entered the stage, my excitement rose tremendously, simply for the fact that she is such a powerful role model to all women, especially women of color. Although her small speech about love of all kinds was general, I will admit I got a bit teary-eyed when she began to officiate marriages for the wide range of couples filling the bottom aisles of the Staples Center. In the middle of her officiating, Queen Latifah was gestured to the side of the stage to make room for Madonna, who then sang “with” (read: over) Mary Lambert. It might have been done to save Queen Latifah from getting hit with the door, or so Madonna didn’t trip over her cane, but it was still very visible and it interrupted her space and her speech.  The mirage of beauty, equality, and justice was shattered in that moment. As the camera cuts away before any same-sex couples seal their marriage with a kiss, the “good-guy-does-good-thing” veil was lifted so we could see this performance for what it really was: straight white people literally and figuratively upstaging POC and Queer people who NEED the spotlight and representation.

Macklemore has tweeted homophobic and transphobic slurs on twitter. During his “Same Love” performance, he used the f-slur and CBS DID NOT censor it. He steals from queer artists for his personal gain, with no credit or mention of his “inspiration.” Macklemore isn’t here for queer people. Tumblr user “unprotectedsexwithmultipartners” points out that celebrities like Macklemore and Lady Gaga “take LGB and turn it into a marketable load of manipulative bullshit and completely leave out trans*, intersex and nongenderbinary/gender persons.” They are not the heroes of a movement, they are just the people who capitalized on the issue.

We shouldn’t need to applaud white people for not being absolutely terrible people. We should be recognizing the queer voices who breakthrough their respective “-isms” and land into popular culture. It’s time for Macklemore to step aside and let POC and queer people take the stage. Maybe he should promote Angel Haze’s version of Same Love. Maybe it’s time for him to pay homage to Le1f. Maybe he can let Mary Lambert take up more space on stage and fill the air with more of her music. Straight white male opinions can matter, and they can do helpful things, just as “Same Love” was able to when it was first released. I’m so excited that Macklemore was able to popularize an important discourse with his privilege, which can assist in creating a safe space and platform for POC and queer artists within popular media. With that said, when a queer voice opens up on a queer matter, the straight white male needs to sit down and stop talking so that voice can be heard.

*This piece was written as a collaborative effort between Jasmine Robinson and Ingrid R. Taller.